Yesterday I sent a copy of Wandering City Blues to one of my uncles and his family outside Chicago.  Inscribing a book to family is always funny because I want to add more to it since these poor bastards have put up with me my whole life, including when I was a baby.  "Enjoy, Uncle Charlie and co.  Don't mind the sex scenes and graphic torture and stuff; your brother did a good job as my dad, I promise!  See you at the family reunion!"  That would make for an awful Christmas get-together though, right?  I walk in the room and someone's telling my 90-year-old grandmother "And then it's implied that this one guy gets fellated by some other guy's wife while he's investigating this ritual killing..."  Seriously if you're related to me please don't do that.

The big news of the week is that I was interviewed by the great Case Murphy for a new series of creator-based video interviews he's working on with a friend of his.  Yesterday, Case and I had a great 25-minute discussion about WCB and the future of Fogworld at Comic Logic in Ashburn, VA.  His video will be uploaded shortly (I imagine I'll get a link to you by next week), but in the meantime, check out these shots of Case and Connor setting up the equipment. 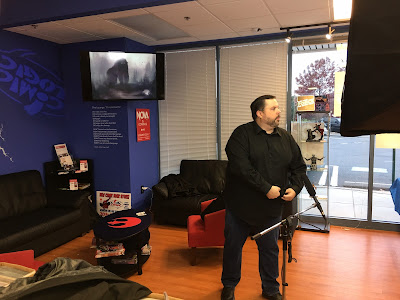 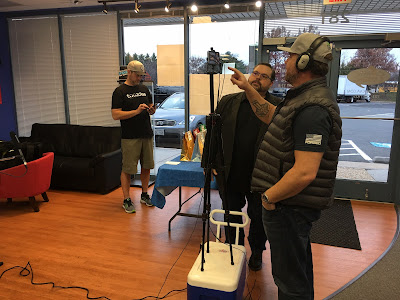 In the first picture, you'll probably notice that Nick Whitmire's original concept art for Proteus is on the TV, which was pretty badass.  In the second picture, you'll see Kevin Bednarz on the far left.  Kevin and Case co-own Comic Logic and The Ashburn Pub, where Wandering City Blues had its local launch the week before Halloween.  Kevin also invented the custom cocktails for the book, whose recipes are in the back after the end of the story.

I'm looking forward to seeing the final video and I hope you guys can stand listening to me talk for that long.  Have a good week; stay warm wherever you are!
Posted by jonny Lupsha at 9:54 AM No comments:

10 Points Will Be Deducted from Ravenclaw / The Customer Review Thing.

Damn, guys; I am so sorry I missed two weeks in a row on here.  I hate for you to check for an update and get ripped off when you see the same old stuff sitting up on the blog.  To rectify this, I'll be taking 10 points from Ravenclaw, the house that Pottermore's Sorting Hat put me into, in consideration for the House Cup at the end of this year.

Some of the challenge is that once a book is out, it's tricky to come up with new content about it.  By this point, I've spoken with several people who have offered me their feedback on Wandering City Blues, which has ranged from "generally positive despite some wrinkles" to "overwhelmingly glowing."  Several reviews for the book have popped up on its Amazon page; please feel free to add yours if you've read WCB and have any thoughts on it.  I trust and respect your honesty.

Speaking of which, you may notice on WCB's Amazon page that one of the reviews is rated one star out of five and I'd like to talk about it for a minute.  I don't mind getting a shit review from anyone who hated my work.  I get a little heartbroken inside, because I feel like I've let that reader down and have wasted their time and money.  And I get a little nervous, because every time I publish a book I feel like it's the best that it can be and that I'm proud of it, so a lowest-possible review makes me wonder if I'm so far off-base that I think something terrible is really great and I'm making a huge mistake.  As a self-conscious humanoid mammal, I have an easier time believing insults than compliments, which kinda fuels those fires.  But at the end of the day, one-stars are part of the business and I accept that they happen and I do my best to take criticism to heart when I feel the person has a genuine issue with something I've written.

But this particular one-star reminds me of one of the only one-stars I've gotten for Penny Cavalier, my investigative journalism piece about Real-Life Superheroes (actual costumed vigilantes and altruists).  In the Penny Cavalier review (please click the link so you can read and verify that I'm not making excuses), the one-star was given to me by someone who was an RLSH from way back when and he expresses his disdain for not being included in my book.  In fact if you look closely, he doesn't mention the manuscript at all except in regards to his lack of inclusion in it.  So I can't say it's incredibly helpful or comprehensive.  The review for Wandering City Blues is similar, but there's more of a story behind it.

When I was in post-production on WCB, a friend of mine who runs an entertainment website offered to have one of her writers review the book for her site.  I sent her a digital copy of the final manuscript and stressed to her that all's fair in love and book reviews, so not to let our acquaintanceship influence the review, and she agreed.  In fact she made good on it and had prepared to publish her writer's review on the website.  I've since seen the review, which had given WCB a 6.0/10 on the basis that the reviewer felt my characters could have built 1,000-foot-plus skyscrapers in the year or two that it took for the fog to spread over the surface, rendering the theriopolises obsolete.  Now, I'll admit that personally I disagree, because I feel like buildings of that magnitude take years and years to design, contract, construct and finish...but hey, maybe it's my job to explicitly explain that away in the book and I didn't to a satisfactory degree.  So I understand.  Of course I'd love to get a 10/10 or something - who wouldn't? - but I could live with six.  In the end, the review wasn't published, partially because it contained multiple story spoilers regarding character deaths and plot twists/points that occur in the first 100 pages of the book, and mostly because at the same time, this reviewer had had a falling out with the website regarding several separate issues excluding this review and she was terminated from her post.  Wandering City Blues just ended up being in the wrong place at the wrong time for her.

Fast forward a month.  The book is released and available on Amazon and during the week of Thanksgiving I check out the page to see if it's gotten any reviews, and lo and behold, this same fired reviewer has now chosen to lower her score of the book from a 6.0/10 (or a 3 out of 5 on a five-point scale) to a 1 out of 5.  Oh boy.  There, she voices the same criticism she had in her first review but condenses it down to one sentence.  My first thought is to wonder what would cause her to feel as though her same criticism of the book would bring her score down from a 60% to a 20%, but out of concern, I tell my friend - who runs the website for which this review was intended - what's up, because my friend has also put out a couple books on Amazon and I want to give her a heads-up in case this woman is on some kind of review-bombing tear.  Review bombing is a subject I've covered in the past for IGN and is the main reason I've written out this whole story.  So my friend took a look at her books' pages on Amazon and this same woman has given her several one-star reviews as well.  And I hate to think the worst of someone, so I played devil's advocate until I read the review she'd left on one of my friend's books, in which she rated it one out of five for mixing up the spellings on "then" and "than."  As I said, oh boy.

So I'd like to take one more minute and entreat you, my friends and readers, to think hard about how you rate independent creators' works on any websites before you submit them.  If a book only has one review and it's a five-star review, and your personal dislike of the creator leads you to give them a one-star review, then in one fell swoop you reduce the public image of that book from five stars to three, from "awesome" to "mediocre."  And being on the comic convention circuit in the Virginia area, I've encountered several people whose businesses' success or failure can change with every review or every bad weekend at a con.  If you glued my experience with this WCB reviewer onto their state of business, you'd be looking at someone having to give up their dream and go back to an office or retail job because one person bore a grudge against them for something.

Now, if their work has truly earned that single star on its own creative merits, then by all means, let it fly.  I'll eat crow if I get one of those.  A family member told me that the back cover of my first book, 100,000 Years in Detention, looks like amateur hour.  It sucked, but he wasn't wrong.  So I've taken it into consideration and done my best to ensure I end up with better-looking jackets since then.  I had a teacher from a college stand at my table at MadiCon and trash The Broken Paragon for 20 minutes (without having read it) and I just had to grin and bear it.  Sometimes we get hit where it hurts and we just have to grow thick skin and get through it.  But please, when reviewing either a seller or a product, keep your feelings on each separate and give feedback accordingly.  Words matter.  If they didn't, I wouldn't be here.