Early on in my research for this book last fall, it became apparent to me that I'd have to have my humans move from one wandering city to another.  This process would have to be practical, quick and believable but above all, not in the least bit extravagant nor convenient.  I think I've mentioned a few times on this blog that I wanted to do away with too many easy answers for the characters on the theriopolises.  The indomitable spirit of survival and the perseverance that breeds ingenuity are regular backdrops for this book.  Chief among them is inter-colossus travel, which I've detailed briefly but here's a thorough look at my system.  It's a bit wordy, but stick it out with me - it's pretty badass.

It all starts when two colossi find themselves within about a quarter-mile of each other.  For this example, let's say our male lead character Leon Adler wants to depart one colossus - let's use Proteus - to a slightly taller colossus - we'll go with Triton.

All immigration is done by ropeway.  Every colossus is fitted with several ballistae - medieval siege weapons that resemble sedan-sized crossbows - on the port and starboard sides of his/her back.  These manned ballistae fire large grappling hooks, trailing over 1,000 feet of twin ropes, that land on the other colossus's back near its ballistae.  I'm calling the firing/receiving areas "harbors" or "docking bays."  So Proteus and Triton cross paths and Leon wants to go from Proteus back to his hometown of Triton, right?  The ropeway is created when Proteus fires one grappling hook over to Triton and reels it back in until the ropeway has just enough slack for travel.  Now that we have our ropeway we need to get our citizens across it.

Leon Adler and any other people wishing to travel to Triton have to traverse the ropeway, hand over hand, to their destination.  Leon has with him a climbing harness that he straps into.  The climbing harness is in the shape of a pair of boxer shorts but is mostly straps and butt support.

This harness fastens to a short "lifeline rope" (which is just shorter than the length of your arm) around its user's bellybutton area.  The opposite end of the short lifeline rope fastens to a slightly modified zip line trolley - think of a kids' backyard zip line mechanism with no handles.

The trolley is modified with a simple cam device near its wheels.  The cam device works similar to the hinge-mounted door stoppers you see at schools, retail stores and office buildings.  When you nudge the door stopper down with your toe, it allows the door to be opened but it stubbornly brakes when anyone (or the door's weight itself) attempts to close the door.  The cam device is virtually identical in terms of purpose and physics, only it's far smaller.  Instead of a door, it's the trolley.  Instead of the floor, it's the ropeway.  Now, these cams really do exist and are a different part of rope-climbing rigs, but we'll get back to that.  With a cam that only allows the trolley (and its rider, Leon) to move in one direction, Leon can climb the rope to the higher point (Triton) freely without risking sliding all the way back down to Proteus's ballista.  The cam stops them from losing ground.

In addition, there are two other pieces of climbing gear attached to our intrepid detective to aid in his journey.  These are two different types of foot ascenders.  The first is a basic foot ascender: a set of nylon straps that tie around the shoe with an all-important cam device near his ankle.  When Leon is ready to start his journey, he threads the cam on his foot through the ropeway and closes the lid on the outside of the cam so it doesn't slip out.  Now he can, for all intents and purposes, climb up the ropeway with this foot, using the cam and his body weight like rungs on a ladder.

That may be enough of a climbing rig to satisfy most fact-checkers and doubters, but goddamn it to Hell, anything worth doing is worth doing right.  So let's look at Leon's other foot.  On Leon's other foot, he wears a Haas foot ascender, which is a real-life, honest-to-God special kind of ascender invented by Michael Frankhauser.  The Haas does have a boot strap like the above-pictured ascender, only instead of attaching straight to the cam, the boot strap attaches to a fixed-length retractable bungee-like cord.  This cord reaches up about to the climber's thigh and attaches to the ropeway at that point  - and there is where the cam clips on.  This way, partnered with the standard ascender pictured above, the climber can run up a climbing rope with both feet, as though the climber had personalized steps/rungs on a ladder, moving as fast as his or her arms can grab at it. 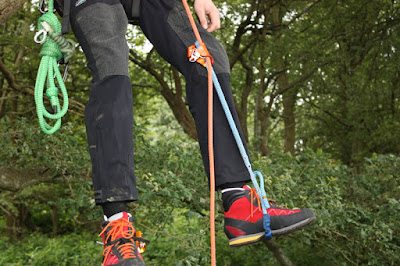 Don't believe me?  Or did I do a piss-poor job of explaining it?  Here's a video for proof.  This climber attaches completely to the ropeway in 30 seconds and climbs 75 feet in another 15 seconds.

Please don't imagine that the use of the Haas ascender in my book in any way equates to me receiving any compensation or endorsement from Mr. Frankhauser.  I thought his device was a cool and practical and helpful invention and I wrote him and explained my project and asked if I could add it into the book and he said yes.  End of story.  Well, aside from him taking the time to explain to me how a lot of SRT (single-rope technique) climbing gear is assembled onto the climber and the rope itself.  At this climber's pace, 75 feet in 15 seconds or so, a 1,000-foot journey straight up to Triton would take Leon about three and a half minutes.

But didn't I mention a second rope?  Well, I know I haven't much gotten into the politics of an immigration system complete with passports etc. today, but the second rope would be for an immigration officer.  This officer takes the second rope on the same grappling hook (with the same climbing gear) down about halfway between the two colossi.  S/he checks the travelers' immigration papers to make sure everything's in order and can then either send them on their way or turn them back the way they came.  Failing their adherence to this law, they can either be detained at their destination or, in an extreme circumstance, unhooked from their lifeline by the officer and sent down to the surface.

"But if Leon's taking up the rope headed from Proteus to Triton, what about people who want to go the other way?"  Well, as I said, both colossi are outfitted with several ballistae each.  Remember when I said earlier that the two colossi approach each other and each harbor fires the grappling hook to the opposite colossus?  That's where the other one comes in.  While Leon has adorned his harness, lifeline, trolley and both foot ascenders to climb up to Triton before their paths crossed, other citizens from Triton have done the same for their journeys to Proteus.  With ropeways headed in each direction, the transit system begins to resemble a two-way street...dangling 1,200-plus-feet in the air.  Since Triton's citizens merely need to head downhill to Proteus (Triton is the tallest colossus), they can skip wearing the foot ascenders on the way down and simply slow to a stop when they reach the halfway point and the immigration officer.  Most zip line trolleys these days offer handbrakes, and even on ones that don't, using climbing gloves to cause friction on the rope is far from out of the question.

Okay.  That's plenty to tide you over for the week.  Enjoy!