After last week's unimpressive amount of creative output, I decided to hunker down this week and try to make up for lost time, punching in over 4,000 words - which would've likely been closer to 5,000 if I could stop playing Uncharted 4.  Nevertheless, I made some great progress.  More on that in a moment.

I've noticed while writing this book that I worry about something I never realized I'd worry about: time passing.  You know how, in movies, sometimes it'll seem like it's only been a few days of activity but near the end a character will say something like "Well, over the last few months since all this happened..." and it seems crazy?  I'm concerned enough with that happening to me that I find myself doing the opposite.  In the main story, there have been three deaths, a murder investigation, a journey from Johannesburg to Paris to New York and over a half-dozen languages and civilizations mentioned...and I think the whole thing has taken place in about four weeks.  Fortunately it seems to be flowing at a realistic pace.

Anyway!  This week I introduced Psamanthe, my flying colossus, in the book.  I posted a "first look" at her a couple months back, but here she is again as a refresher. 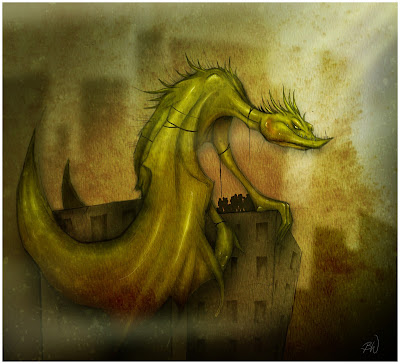 Psamanthe is populated almost entirely by Pacific Coast Indians - specifically the Tlingit and Haida.  My mantra of sorts over the last several months has been that I want to express the diversity and population shift in the world of the leviathans, and as animists with an avian deity, the Tlingit seem like the best choice to populate Psamanthe.  They help Leon travel from Paris (where he disembarks Triton) to New York to follow a lead in his case.  On the long flight to the West, Leon finds himself lapsing into a daydream, remembering an old conversation he had with his grandfather when he was a boy.  In the conversation, Leon's grandfather tells him about several of the other ways people tried to leave the surface when the fog came out of the ocean.  Here's a section of that conversation.


Leon's grandfather had also told him the saddest story of survival in vain – the story about the people who fled to mountaintops and other high places, believing the early, unsupported rumors that the 1,000-foot fog ceiling that rolled in from the seas would become thinner at high altitudes.  “’Oh, the air in places like Mount Kilimanjaro and Mount Everest is so thin, there’s no way the fog could creep very far up them,’” his grandfather said, imitating early evacuees with a tone of flippancy.  “’You wouldn’t have to go up to where you couldn’t breathe – just a few thousand feet from the base would do it.’”  He shook his head and took his own voice back on.  “Some of them even built greenhouses to get fresh oxygen further up there, sonny.  You had whole swarms of folks just trying to buy up land and build housing further and further up the sides of Makalu and Mont Blanc and Denali.”  He sighed.

“But it didn’t work.  None of it worked.  We’d pass nearby a mountain a couple times a year and there would just be less and less of it visible.  The families who stayed down there realized it, too.  They crept higher and higher up the mountainside every few months.  They knew what was coming.  Imagine.  Imagine a mother and father looking down and seeing that, that gloom, marching towards them like a sentinel – towards their family, their children.  Now think about this.  You know the mountain climbers used to have to bring oxygen tanks with them just to climb up and down the mountains because the air gets so thin.  You know that, right?  Nobody had brought oxygen tanks with them when they moved – they figured they’d rest comfortable between the fog ceiling and the summit.  Even if they had brought them, oxygen tanks wouldn’t last forever.  So you’ve got desperate families – parents, trying to protect their children – moving up the mountain to escape the fog that they’d been assured would never get to where they’d moved.  At the same time, they know they can only go so high before they run out of oxygen.  Stay and catch Red Lung, move up and asphyxiate.  What do you think they’d tell their kids?”

His grandfather paused to let the thought sink into Leon’s head.

“Now I said some folks opted to buy higher and build these big greenhouses to try and get fresh air from plants they brought,” his grandfather said.  “Well, how long do you think they’d last with every one of their goddamn neighbors breaking down their doors to get in?  If the fog was moving up the mountaintop, it would get to the greenhouses eventually, but giving up is not something we do easily.  Some people kept their civility and migrated as high up as their lungs allowed and just waited it out, but others…”

“What happened to all the people on the mountains, Grandpa?”

“Nothing good, kid,” he said.  “Like I said – we’d pass a mountain at first and see people living on the mountainside, houses, kids playing outside.  We’d go past it again in a few months, and after a couple more passes the houses would be swallowed up by the fog, campfires burning and tents pitched a few hundred feet higher.  Into the second year you could tell how much smaller the visible summit had gotten, and fewer fires and fewer tents were set up, and they were closer to the greenhouses.  Eventually the fog overtook them too, and before long…”

Thanks for reading!  As always, please share with your friends and let us know your thoughts at A Carrier of Fire's Facebook page.