Greetings, friends, fans and sci-fi lovers!  jonny Lupsha here with another look inside my upcoming science fiction debut.  I've got some really exciting stuff for you today but I'm saving the best for last so read to the end!

First things first.  When I came up with the idea for this project, I knew it wouldn't work as a story if it didn't work factually.  I knew I'd have to do several hundreds of hours of research to figure out how to move every essential in life from the surface up to the sky without many staple commodities we take for granted.  Fresh air wasn't a huge problem but food, antibiotics and prisons took a good deal of time.  Hell, just figuring out how to get humans to travel from one colossus to the other took close to 30 hours of research and involved me looking up everything from medieval siege weapons to rope climbing gear.  Eventually life on the theriopolis began to look feasible.  Without soil or dirt, there would be some things we'd have to give up and some we'd have to work around, including raising crops through indoor hydroponic and aeroponic gardens with soil substitutes and compost.

But then I had to figure out cigarettes.  At the heart of this book is an old-fashioned detective story with bad slang, a trail of clues, unfaithful seductresses and an unshaven detective who smokes like a chimney.  Unfortunately, due to the limited space on each colossus, there's no room for large fields of crops - no cornfields, apple orchards or rows of tobacco plants.  Even if there were the space for it, tobacco ruins soil so I don't know that it would be allowed by the final people on Earth.  It could jeopardize their remaining crops and they'd all starve to death.  But I wasn't willing to give up, so I had to figure out how to smoke cigarettes without tobacco.  Hoo boy.  I started by going to a bunch of head shop and hookah-related websites detailing various herbs and plants that could be grown hydroponically that may have similar tastes or effects to our common cigarettes.  I found three plants that could serve as a blend of smoking herbs:  Damiana, from Mexico; Kanna, from South Africa; and Wild Lettuce.  The former two mix for a solid herbal smoke that relaxes and energizes while Wild Lettuce gives the smoker a bit of a buzz.  When mixed in the proper dosages, Detective Leon Adler could feel groovy and alert enough to keep him hooked on them.

So now that I had a blend, what to do with it?  I could've gone the easy route and have him fashion/carve/barter a pipe, but that was a little too Sherlock Holmes for me.  Leon is definitely more modern than Holmes so I wanted him to smoke cigarettes, not pipes.  But since there isn't enough soil around for small forests - generally only enough for a town square with several large trees to provide an extra cushion of fresh air - how do I have someone roll a cigarette without paper?  I've heard that pages from The Bible make good rolling papers, but that seemed a little sacrilegious for him.  So I looked up how to make paper and found that if you grow coconuts, the fibers from the outside of the husks can be pulped with a deckle and some water, then shaped and dried out to become paper.

Last question:  If Leon can buy blended cigarettes and roll them in paper made from coconut fiber, how will he light them on demand without a lighter or matches?  I don't want him sitting rubbing two sticks together half the damn day, right?  Fortunately this problem presented a solution quickly and simply with several methods used by Survivorman types.   The best came from refracting light through curved glass during the day.  Like burning an ant with a magnifying glass, any curved glass like a lens from binoculars can harness and concentrate the rays of the sun to rapidly heat something - in this instance, the tip of a rolled smoke - and set it ablaze.  There's a nighttime method too, but we'll leave that for the book.

So there you have it!  As promised, how to keep up a smoking habit with no tobacco, no paper and no matches/lighter.  Now I have two more exciting pieces of news for you.  First, in the last 10 days or so I've written three scenes for the book.  The first two scenes go together in the main manuscript immediately following the almost-15,000-word setup "Timeshare."  Those scenes involve Detective Adler investigating a crime scene then following up with an eyewitness interview.  They're a good start to the main story in the book at about 3,100 words and the more I write, the more ideas I get.  Secondly, the third scene came from one of those spontaneous ideas I had while writing the first two scenes and it almost immediately grew from a one-paragraph moment of exposition to a 3,700-word scene that will likely take place about 1/3 of the way into the book.  So I've written a brand new 6,800 or so words for the book in the last 10 days, but over half of that needs to wait until I write my way to it later this month.  For those keeping score, my total book word count is up to about 21,500 right now and I still have the vast bulk of it to write.

Lastly, and most excitedly, I recently received a great piece of concept artwork for Psamanthe, my flying colossus, from visual artist extraordinaire Brian Whitmire. 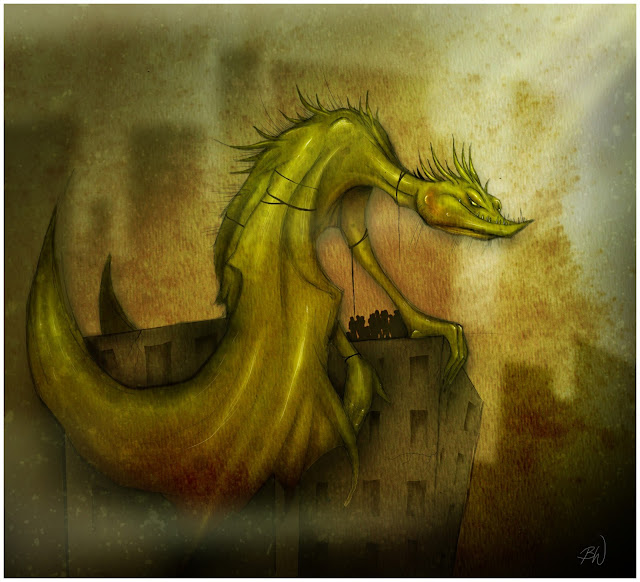 Brian's style is radically different from his brother Nick (who put together Proteus for us), and I really like what he did with Psamanthe.  I think she'll be bigger in scale than he implied here, but I love her hybrid avian/mammalian appearance and seeing her letting her residents off to camp on a rooftop for a while and rest.  In the book, she'll drop them off there like babies at a nest and go forage for food for them, likely diving into the water and scooping up a mouthful of several dozen (or hundred?) fish and releasing them for her humans just like a real mother bird.  They can eat the fish or trade them for high prices since they're the only place to get fish.

Alright!  Keep tuning into Wandering City Blues for more information on this book.  I've got behind-the-scenes looks new details, concept art and more to share with you so keep checking back.
Posted by jonny Lupsha at 2:10 PM