In order to incorporate human travel from one of this book's gigantic beasts to another, I sought to establish routes by which they'd circumnavigate the planet.  Aside from the creatures themselves, however, I wanted to root as much of the novel in reality as I could.  I thought it would be too easy, or even "cheating," if I arbitrarily had them cross paths whenever I saw fit for the story.  Instead, I opted to give my colossi personalities, as many species of animal have in our world.  This would help determine which paths they'd take around Earth and why.

Today I'm proud to present the fruits of my last week's research:  the migration patterns for my largest two leviathans, Triton and Proteus.  Here's a mid-size map of the places they visit; please feel free to click here to download an extra large (4.94mb) .jpg of the same map, or simply click this image for a larger version.  (More text below) 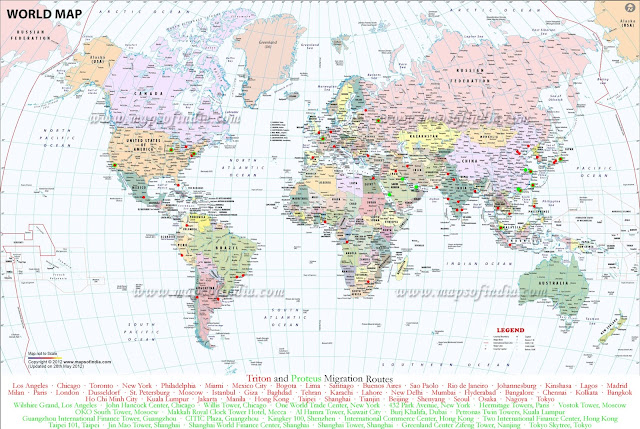 Upon emerging from the sea, Triton, the largest creature, was attracted to some of the cities on Earth that had the largest populations of people - as a big fella, he likes big cities, which is how his routine developed.  Of course, since humans now live on the leviathans' backs, Triton's journey - which takes him to 50 of the largest cities we had at the time of departing the ground - continues now more out of habit than anything else.  On this map, his points of interest are displayed as red dots.

I've imagined Proteus as a creature with longer front legs than hind legs, like a gorilla that walks with his fists on the ground.  Since this puts him at such a peculiar upwards-looking angle, Proteus is a silly and curious titan who loves the tallest things.  Since his arrival, he has circled Earth visiting and playing with 25 or so of the world's tallest skyscrapers and tower structures.  He sees them the same way we see Stonehenge or the Easter Island heads - curiosities our size or bigger - although Proteus isn't afraid to use a billion-dollar high-rise to scratch an itch on his shoulder.  His favorite spots to travel are represented by green dots (or green circles surrounding red dots, whenever Proteus and Triton both visit the same city).

One of the great things about setting this life-changing event in the near future is the opportunity to write in buildings that have yet to finish construction as of Fall 2015, like the Hermitage Towers in Paris or the Wilshire Grand in Los Angeles.  Again, I wanted to make this world as real as possible, so I stopped myself from inventing new skyscrapers as an easy crutch for writing the travel routes.  However, utilizing unfinished towers lends the setting the near-future tone for which I'm aiming.

Stay tuned, there's a lot more to come.
Posted by jonny Lupsha at 11:08 AM